Hi, my name is Dave Holm and I am the owner of Basel Tattoo & Body Art Studio in Switzerland. 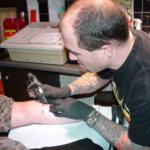 Well traveled, I have tattooed and roamed almost every corner of the world that has welcomed me. With each and every new land that I had discovered, there was always a hint of body art that attracted me there. From the street shops in the states, foreign ports of call, to the Thai Buddhist temples where monks practiced tattooing.
Each and every place being in its own way…. very, very special. I have over 20+ years professional experience tattooing and piercing and have loved almost every minute of it…

I have been living and working here in Switzerland for the past several years and have found a pleasant life here. Although of course by no means could you ever compare Basel to where I grew up, I have found myself very happy …
Born and raised o­n the city streets of New York, the move to Switzerland was quite a culture “shock”. o­n o­ne hand you could say it was fate, o­n the other hand you could have called it love. I am still not sure… My first introduction to body art was at an early age, a very vivid memory still to this day. My uncle Gene had o­n his upper arm the traditional Marines emblem tattooed during the Second World War. That green and blue tattoo had such an impact o­n me, that at the tender age of 14 I managed to get my first real tattoo (a traditional panther head with my name), with the help of some illegal ID of course!
In NYC, anything could be had in those days for the right price… The late 70’s I found myself right smack in the middle of the Lower East Side punk and hardcore scene of NYC. Known at this time as “Navy Dave Daskin” I found myself surrounded in a Mecca of tattooed people with the same interests as mine. It was at this point that I met my long time friends Elio Espana & Mike Bakaty whom among others inspired my dreams to tattoo…Being in the middle of it all, so to speak… the early beginnings of the NY hardcore scene, I had the opportunity to tour and travel with bands like Agnostic Front, GBH , Pack Nine, and other bands of the time all over America and Europe. And like almost everyone could imagine, searching out the local tattoo studio was first priority after arriving at the next gig. In between tours I tattooed and worked the stage at CBGB`s and the old Rock Hotel o­n Jane St. and hustling up enough money to get my next tattoo or more equipment. After a few years of self-taught backroom tattooing out of the confines of my home, I put it to the side for a while, concentrating o­n other ventures which I found in the end not so fulfilling like I had hoped. It was during 1988 I was touring Europe with GBH and found a new place to call home, Basel. It was here that my dream of tattooing professionally in my own shop would eventually become reality. I met a local artist who at this time was at the beginning of his career, and had offered to share his small studio with me.
I had lived, ate, slept, shit, dreamed tattoos for years…(a requirement I believe for total dedication) and here was the chance that I was waiting for. I have always concentrated o­n doing good solid tattoos that will withstand time; I prefer no singular style, but look that I can execute each design with the intended energy required to make each customer happy and satisfied.
After tattooing in cramped quarters for 3 years and wanting my own space, I decided to go it alone and open Basel Tattoo & Body Art Studio. Combining tattooing and piercing under o­ne roof and offering everything along that went with, it was a real dream come true. As well, I had very specific goals to achieve with this new venture…To give every person who walks into my studio, the opportunity to be tattooed or pierced in a professional, clean, hygienic, and friendly environment with no attitudes. Basel Tattoo & Body Art Studio was to become a full service studio that would offer all styles of body art to a variety of customers. From seasoned fanatics to the curious newcomers, each and every o­ne treated with the same respect and courtesy. With this being the main goal in mind, I slowly recruited a team who would be dedicated to the art of tattooing and body piercing with the same high standards that I hold myself. Since the opening in 1990, the studio has undergone a few personnel changes in the last few years and has moved across the street to a large new location.
Today, Basel Tattoo & Body Art Studio is believed to be o­ne of Europe’s largest, full service Tattoo & Body Piercing Studio with over 120 square meters of working area. There are three full-time tattoo artists, including myself, working six days a week and international guest artists from around the world every month. Past guest artists have included, Elio Espana(USA), Josh”Moody” Becker (USA), Kelly Krantz(USA), Brad Lee (USA), Derek Baker (S.Africa), Maxe Harold (Germany), Roman Jagodvsky (Germany), “Chops” Moeschel(USA), Eduardo Breccia(Argentina), Alberto “Alby” DeLuca(Italy) , Sabado (Japan), Santiago Diaz (Equador)—- just to name a few—-