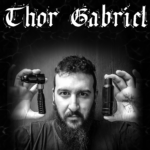 From Cyprus born July 1987,  Thor is currently living in Zurich Switzerland. Having an interest in art from an early age he studied Graphic Design at the University of Wales. During that time he discovered airbrushing and soon opened his own custom motorcycle workshop. It wasn’t long before the motorcycle culture influenced him to want to learn to tattoo, starting with a pair of old machines and a few trusting friends as canvas. Thor has worked in numerous high profile studios in England, USA, Japan, Cyprus, Greece and Denmark. Working alongside world renowned artists such as Roman Abrego, Matkovski Calin and Horisei he has become a well rounded artist able to tattoo any style.

Favorite styles of tattooing being B&G realism, comic book/anime style and Japanese traditional. He is also proficient in the Japanese hand poked method called Tebori having trained under Master Horisei on the Japanese island of Okinawa. Thor’s style is a blend of Japanese organic flow and simplicity with modern realism and color blending fused into unique designs that flow and accentuate the human body. Thor believes that a tattoo is not just an image but also a story. His designs are made to be long lasting and to withstand the test of time and still be clean and legible for many years to come. In his spare time he likes to play drums and guitar, tinker with machines, ride his motorcycle or just sit back and relax with some movies and video games. Instagram @ thor.gabriel_tattoo